Belgrade is the city where everybody is welcome. After you have arrived and walked these streets, very soon it will be clear to you that this Serbian capital has put you under its wing and that you’re not just a guest anymore. Now you’re considered a local.

The center of Belgrade offers a lot of interesting things to see and do, but the true adventures don’t stop here. That is why the best thing to do is to use the city center as a base from where you can visit other destinations that are close and have the unique weekend experience.

Here are suggestions what to visit near Belgrade.

First on the list what to visit near Belgrade is definitely Novi Sad. 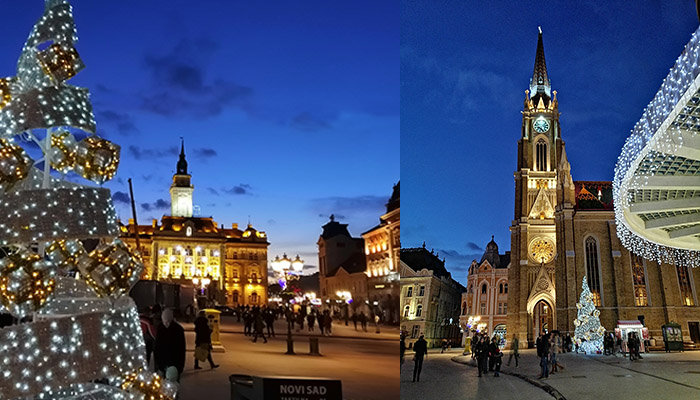 If you take the highway and head north, in less then an hours drive by car, you will reach Novi Sad.

During this travel you will cross the famous bridge at Beska, the unique bridge in this area. In Europe, it is the longest bridge over the Danube. It is 2.2km long, and 16m wide. What makes it so special, is its height. This bridge is situated 55 m above the beautiful blue Danube, offering one of the most magnificent and breathtaking views.

Soon after you cross this amazing bridge you will reach Novi Sad. This is the second largest city is Serbia. During the 19th century this city represented cultural and political center of Europe. Because of that and also its beauty and charm, people often call it the Serbian Athens.When you visit Novi Sad, the city center is something you just have to see. The liberty Square is the largest central city square. The buildings that surround it are made in very authentic architecture. In the middle of this square, there is a statue of Svetozar Miletic – a famous lawyer, politician and a former mayor of Novi Sad.

There is an anecdote about this statue. During World War II, after getting an information that the occupier is planning to remove the statue, citizens of Novi Sad took it off and hid it. After the liberation of Novi Sad the monument was returned to its place in the central square where it has been standing proudly ever since.

On this square there is also a magnificent Catholic church – The name of Mary (Ime Marijino). It has 4 oltars  and a beautiful organ with 24 registers.

Other attractions of the Liberation square are the Serbian national Theatre, the Uspenjska church and the lovely Hotel Vojvodina with it’s extraordinary beautiful facade.

From the main square you can walk down the Zmaj Jovina street, which is a pedestrian zone. It is surrounded by one or two story houses in which there are many lovely shops. The passages between the houses hide magical gardens and hidden cafés where you can rest and get some refreshment.

When you get to the end of this street and if you turn to the right you will go through a beautiful street – Dunavska street. This is the oldest street in Novi Sad, and leads straight to Dunavski park. This is the favorite green oasis for the people of Novi Sad. In the middle of this park there is a little pond surrounded by tall trees with rich crown. There are white swans swimming on this lake, but also ducks and other birds that, as people, like to enjoy in nature.

On this lake there is a small island – Erzebet island. It was named in the memory of murdered Austrian queen. On the island two weeping willowes were symbolically planted.

In this beautiful green park there are many sculptures and busts of famous serbian poets such as Djura Jaksic, Mika Antic, Branko Radicevic…

When you are in Novi Sad make sure to visit Petrovaradin – Gibraltar on the Danube. On the rocky mount there is a magnificent fort build on the place off pre-historical markings.

The bastion of St. Louis is a recognizable part of this fortress. On it, a famous clock stands proudly, the inseparable detail of this monument. There is an interesting thing about it – when it is cold outside this clock is late, but when it’s warm it is in a hurry. The empress Maria Theresa gave this clock to the Petrovaradin fort. Another interesting detail is that on this clock the long hand shows hours and the short one shows minutes. There is a saying that the reason for this is so “both boatman and Hungarians can see what time it is”.

From the plateau of Ludwig von Baden the view is incredible. You can see the whole city like it is on the palm of your hand.

The following on the list what to visit near Belgrade is Sumadian wine route.

For those that are currently not in the mood for the plane on the north, but would like to experience the wine with a taste of history, there is a wine route that would take you south from Belgrade.  In a bit more than an hour’s drive, you will be on Oplenac. From there you can keep following the wine route and go even more south into Sumadija – the epicenter of Serbian winery.

If you have ever wandered what is the right time to make the wine tour, the answer is – always. Although the scenery has the most colors in fall, while vineyards are showing off in the sun.

On Oplenac, behind the house where the royal family used to reside while visiting this summer house, there is the vineyard, a real gem of this complex.  This is where grapes were raised for many years and from which the wine for the royal family used to be made. Right next to the vineyard there is a path where you can take a walk and enjoy in colors of this scenery, that blend from green to gold.

Almost at the end of this path there are benches where you can take a rest. From this place there is such an amazing view. You can enjoy by looking at this beautiful vineyard that is right in front of you, or observe the waves of the ground that slowly transcend to mountains. On the opposite hill you can see bright-red ground that actually seems like some kind of a red forest.

Oplenac and its sacred things

A very special experience is the visit of a mausoleum an and the church on Oplenac.  The church itself is made of beautiful white marble. The interior is decorated with the most beautiful frescoes, icons and mosaics.  There is not a person in the world that went inside and that wasn’t completely mesmerized by the beauty this monument. 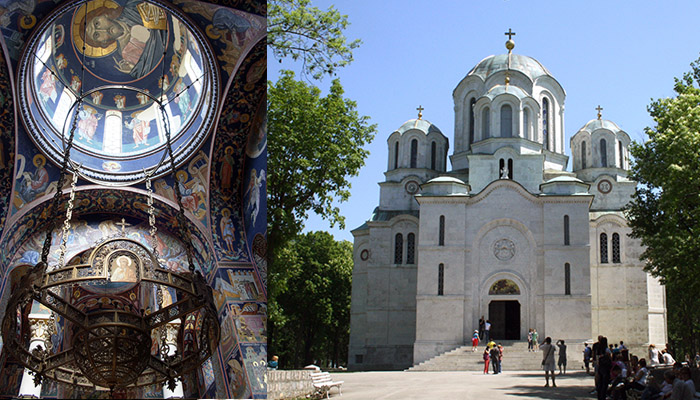 Besides that, on Oplenac you can visit the original kings cellar where you can see bottles with wine up to 90 years old.

From there, the road leads you on to visiting individual wineries. Some are small family wineries, while the others are larger and they export their wines throughout the world. Serbian people are well-known for being excellent hosts. With exquisite wines, and often a buffet,  the hosts will tell you all about grapes, vineyards, tradition and history.

3. Avala –  the mountain at the beginning of the city

At last, but not last on the list what to visit near Belgrade is Avala mountain.

For those that would like to stay closer to Belgrade, but still experience new and interesting things that surrounding the city, Avala is just the right place to visit. This little inactive volcano is the proud symbol of Belgrade. 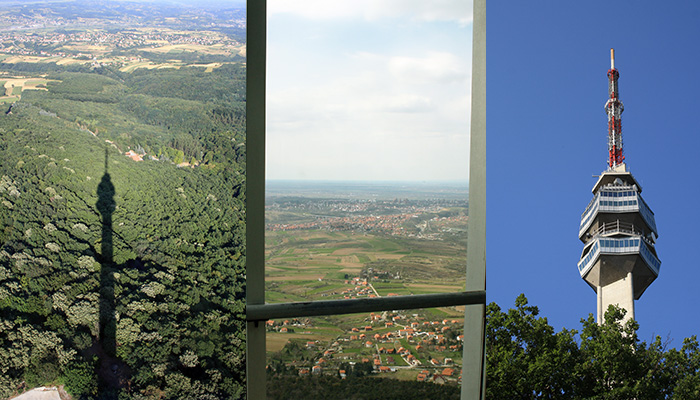 You can get there by many means. For the adventurous ones  there’s certainly a buss (but with quite complicated schedule and transfers). The easiest way to get there is by car.

If you are a fan of walking and hiking, this is the right place for you. You can get from the bottom to the top by walking on marked trails through the forest filled with birds that are singing.  Still, you have to be very careful. Hiking up Avala is not recommended for persons that are not in shape and for those that are not trained to follow marked tracks.

If you go by car, about on the middle of the way to the top, on the left side, there is a monument.

In 1964. the former Soviet Union delegation was coming to Belgrade for the celebration of the 20th  anniversary of the liberation in World War II.  There was a fog and they had an accident. Their plane crashed on the slope of Avala, on this very spot. This accident claimed lives of 18 passengers, 7 delegation members and 11 crew members. Among them were general Zdanov and marshal Birjuzov who fought in heavy battles for the liberation of Belgrade in World War II.

On the top of Avala, there used to be a medieval fortress named Zrnov. What was left of this fort was demolitioned by dynamite in 1934 so the Monument of the Unknown Hero could be built. The author of this mausoleum was famous sculptor Ivan Mestrovic. 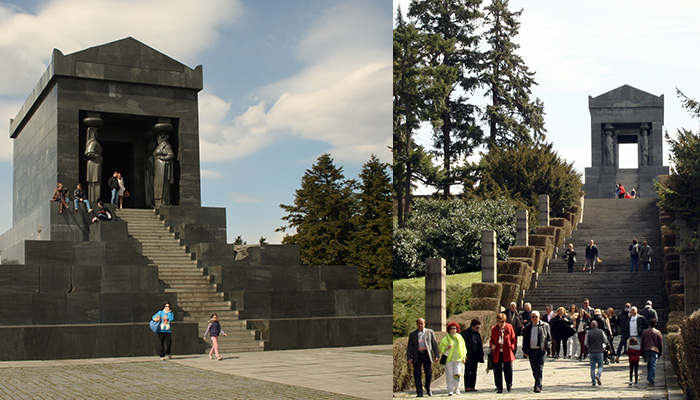 According to some stories, all who tried to destroy Zrnov had bad faith. In 1515 after shooting Zrnov with artillery, the great Hungarian army had an unexpected defeat. In 1934, a few months after demolition of Zrnov, king Aleksandar was assassinated in Marseille.

Belgrade and its surroundings offer adventures and experiences that you will cherish in years to come. Choose from our City-break offers those that suit your taste the best and decide what to visit near Belgrade.