My wife and I really like to travel. Due to our business obligations we didn’t really have much time to go on a longer journey. We really needed to get out of the city, so we decided to go for a one-day visit to monasteries of  Fruska Gora. That was just what we needed – to relax, learn something new and have a wonderful day together.

Monasteries of Fruska Gora – the mountain of the soul

Whenever we go on a trip we exchange what we know about the destination. This time was no different. My wife is an iconographer and she loves Orthodox churches. She told me that the Latin name for Fruska Gora was “Alma Mons” which means the mountain of the soul. As if they’ve somehow foreseen that such spiritual greatness will arise in this place.

“Maybe divine states of the spirit don’t know for time and space and they encounter with us in some invisible boundaries”, my wife, Ivana, told me.

“Did you know”, she added, “that the despot family Brankovic started building the monasteries? They were in a fear that the Turks will smother Orthodoxy, so they moved the epicenter of their spirituality closer to the former Austro-Hungary.”

That is how Fruska Gora became home for the 30 and something Orthodox monasteries and got the alias Serbian Athos. 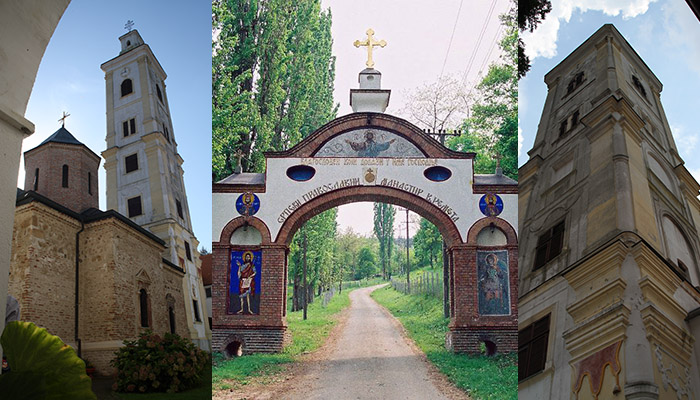 An hour later, and we were visiting monasteries of Fruska Gora. From the glade the winding road descended to a small valley and led us right to the gate of the Velika Remeta monastery, dedicated to St. Demetrius.

A church surrounded by a beautiful rose garden welcomed us. The gentle pink flowers were perking in the sun, filling the air with sweet smell, giving the solemn tone to the surrounding. We followed the stone path and entered the church. Impressive iconostasis made a huge impression on us. The perfect juncture of art and spirituality was radiating from the frescoes on the walls bringing peace to our body and soul.

Near the entrance door, the light fell on the rope that makes the church bell happily sing and dance.

As the old custom is, we bought some candles and lit them in a small place that resembled the cave. We wished for health and happiness of our loved ones, but also for our love to stay strong and never to fade away.

Within the monastery, there is a little book store filled with writings of wise monks, CDs with Orthodox music and souvenirs. The monastery finances itself by selling these and other goods. There we met father Gerasim. This man has the widest and the most sincere smile that we have ever seen. You just simply feel the power of the grace of this man.

At the first moment he seemed a little bit odd. He was telling us about the beauty of the church music, and then, all of a sudden, he would giggle as if he had just seen something very funny. But after a few exchanged sentences we realized that he is as pure as a child and that the faith has made him like that. As if the life he lived before entering the monastery had never existed and as he is looking into the Heaven with one eye all the time.

Keeping a smile on his face, he gave us CDs with church music. Right there, before this person of a true faith, the one that cast out everything that was connecting him to this world, we realized how we live in a huge stress, how nervous we can be and how love, that is the absolute essence of life and faith, is often tempted.

In front of the monastery entrance, up the small hill, diligent monks made the replica of the Mount Zion and the Bethlehem cave. There is also a chapel and at the bottom there is a creek that originates from the Ubavac spring. It is believed that it can give back the sight. We grabbed some water and washed our eyes, so we could have better physical and spiritual sight. 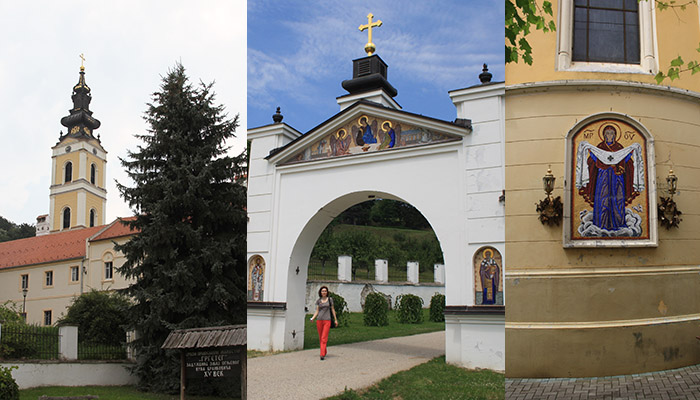 From Velika Remeta the road took us to the Grgeteg monastery, which is, „right arround the corner“. Fifteen minutes later and we were in front of the gate. A long time ago I’ve read that the monastery was built by Vuk Grgurevic (The Fiery Dragon Vuk) so his blind father Grgur Brankovic (monk German) would have a place to spend his time as a monk. My wife explained to me that this is just a legend and not a historical fact. No matter what the truth was, I like the version in which Dragon built a monastery for his dad.

We spent a long time in the church, in front of the iconostasis. We indulged in colors, lines, expressions. It was painted by Uros Predic, one of the greatest Serbian painters. His work is just beyond this world. You can feel every emotion of the iconographed saints.

Even though it was made of cold materials – marble, cast and wrought iron, everything radiates with warmth and affectivity.

Next to the iconostasis there is the icon of Three handed Mother of God, the replica of one of the most sacred relics of the Orthodox religion. Usually pilgrims that come to pray an ask for health from the Mother stand in front of this icon.

Overwhelmed, we sat in front of the church to rest and enjoy the peace that is especially present in this monastery. Sometimes a nun would walk by, rushing to carry out the work given by her superior mother. While walking down the path towards the gate, a monastery puppy made us a company. As if  wanted to see us off, he gracefully walked next to us so we don’t get lost. As a reward we gave him belly petting and some hugging.

Despotess Angelina – the love for the whole life 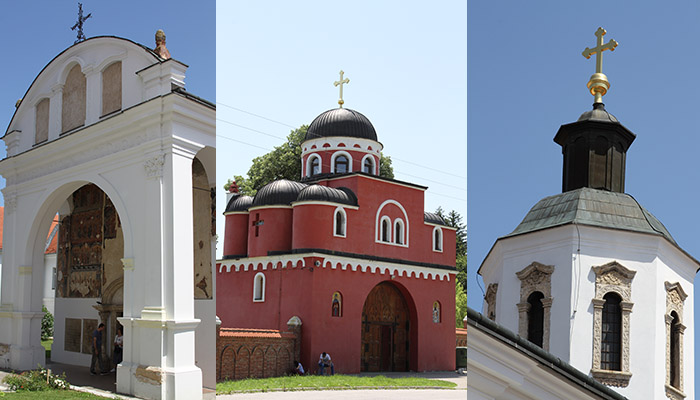 Our next stop was the Krusedol monastery, only ten minutes away from the monastery Grgeteg. Angelinas relic remains are in it, as well as of some great men of the Serbian history: Djordje and Srefan Brankovic (the son and husband of the mother Angelina), patriarch Arsenije Carnojevic the III, who led the great migration of the Serbs, duchess Ljubica, king Milan Obrenovic…

When you enter the monastery immediately you feel the emotion of the old days. These great people that rest here made me wonder about my life. Do I waste my time on the wrong things, the ones that waste my energy, or is my life filled with the right ones? Am I honest and brave? Do I help others enough?

With this thoughts  in our minds, we entered the church. When you touch its rough wall you can feel the love of Angelina Brankovic. Several times she had to move her husbands remains, Stefan the Blind, until her son built this monastery in which almost the entire family rests now. Her husband, Stefan, was blinded by Turks when he was young, and betrayed by his brother. Even though they spent most of their lives in poverty and  changing residence, Angelina has never abandoned her blind husband. She bravely endured the heavy burden of their destiny.

In the church you can feel the weight of the tears she head praying for the salvation of the soul of her husband, their two sons and a daughter Mara, whom she all outlived. No one can stay indifferent to this great love, suffering and sacrifice.

With old and shaky hands she embodied covers for their caskets. Everyone who comes here becomes fascinated by the strength of this woman that, besides all hardships, stayed strong and brave in her faith.

I looked at my wife. She looked at me and smiled. I love when we share a moment, just the two of us, and when all people around us simply disappear.

When we left the monastery, we were under such impression that we sat on a bench in the monastery garden and looked at the draw well.  After half an hour of enjoying peace and serenity, we got up and headed home.

Visiting monasteries of Fruska Gora is a trip that everyone should experience, and surely is the one that you will want to repeat with your loved ones.