There is a great probability that a lot of Belgradians don’t know what they had for lunch yesterday. But in the whole Serbia you won’t find a person that doesn’t know exactly where they were and what they did on that fatal 24. March 1999. On that day NATO bombing began. The North Atlantic Treaty Organization put in operation its powerful war machinery and began bombing former Federal Republic Yugoslavia.

Exactly at 19:45 civil defense sirens went on. TV and radio broadcasted the warning:

“Attention, attention! This is an air ride warning. Turn off the electricity, turn off the gas, open your windows, put the sunblind down, move the curtains. Take your prepared things and slowly go to the nearest shelter.”

Operation under the name “Merciful Angel” officially began at 20:00 sharp.

Not long after, roaring of the strong bombers’ motors, that took off in Aviano, Italy, broke out through the air. There was a moment of silence, and then detonations echoed.

In the following 78 days and nights, around 50.000 different bombs were thrown on Serbia, between 1.200 and 4.000 people were killed, many objects were destroyed, and everybody was left hopeless. 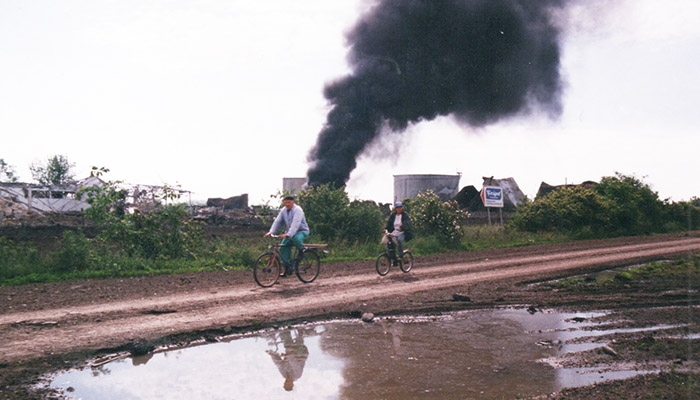 When you just don’t want to believe

In days that preceded, media was buzzing about NATO bombing. People talked about it in the streets, at work, while waiting in cashier’s lines in stores and when seeing off their kids to school. Still, no matter how odd it seems, nobody truly believed that bombing would really happen. There was a feeling of disquiet in the air. The true fear was about to come, fall over and cover the whole country.

I was a kid then, a high school senior that was getting ready to go to a music gig. The sirens found me in the shower. I was rinsing the shampoo from my eyes when they started howling.

Everybody in building was in panic. Especially the elderly who still remembered WW2 and knew that bombs don’t choose where to hit. Still, there was no chaos.

As trained professionals, the whole neighborhood went to the shelter in peace. Hearts were filled with terror. Comfort was provided by our neighbors. The electricity was turned off, and only a vibrant candle light revealed emotions on our faces.

They say that war brings out the worst, but also the best in a person. And like that, it was. I can’t remember that ever in my life that there was a feeling of such harmony and union.

Like that siren turned on some kind of switch in each of us. No dissentions, differences, disagreements… it all just didn’t matter anymore. Every one of us was there to help the one in need no matter whether it was a friend or a stranger. The hardship made us all equal. 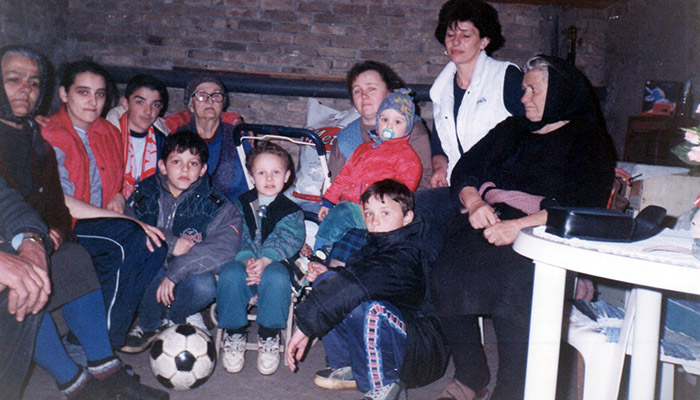 The first bombs fell on Belgrade at 20:38. That first night the airport in Batajnica (that would often be the target of NATO bombing), was hit. Also, three missiles hit surroundings of mountain Avala. Radar station in Rakovica was also the target. On that occasion three schools were damaged, as well as the outside wall of the Rakovica monastery.

With the first explosions all doubts that NATO bombing might just not happen, were chased away. Instead of this one, another illusion emerged:” They will bomb us for just a couple of days and it will be over.”

Days came and went, bombs kept falling, and after a week, nobody thought that the bombing was ever going to end.

It is incredible how people quickly adjust to the conditions that they find themselves in. Yes, bombs were falling, warning sirens were screaming numerous times a day, but it all became, somehow ”normal”. Life just kept going. Instead of saying ”Hello”, people started saying ”Bombello”. Time was measured not by clocks but by ”Screamella” and ”Tranquilla”, nicknames for air raid sirens. Everyone had water and food stashed for a couple of days. The main problem was where to get coffee and cigarettes, since supply was difficult.

The primal goal of the day was to find out what are the next targets of the bombs. The most relevant information’s came from the radio amateurs whom were in constant contact with colleagues from abroad and from whom they got lists of targets that were published in foreign newspapers. Almost instantly the information would reach nearly everybody. In turn, radio amateurs would be brought food and anything they needed. 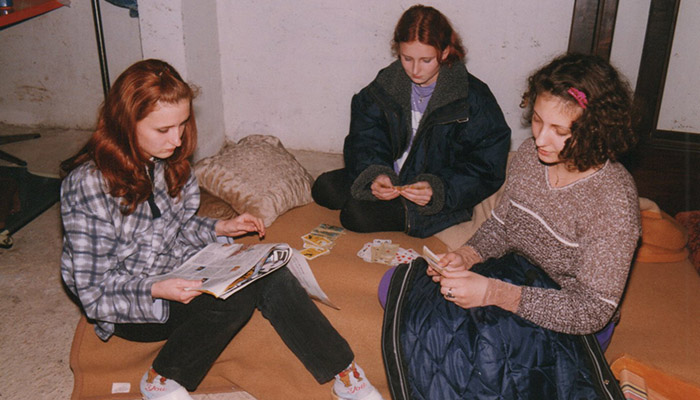 The hardest days in Belgrade under the NATO bombs

Besides military, NATO forces also bombed civil targets. Not only Belgradians, but the whole world was shaken after the attack on these three objects in the Serbian capital.

The building of the Radio Television of Serbia in Aberdareva street, in the very heart of the city, was hit in the night between 22. and 23. of April. At the moment when the bombs stroke, journalists and other employees were inside this television station. Unfortunately, 16 of them were killed and 18 were injured while doing their job. 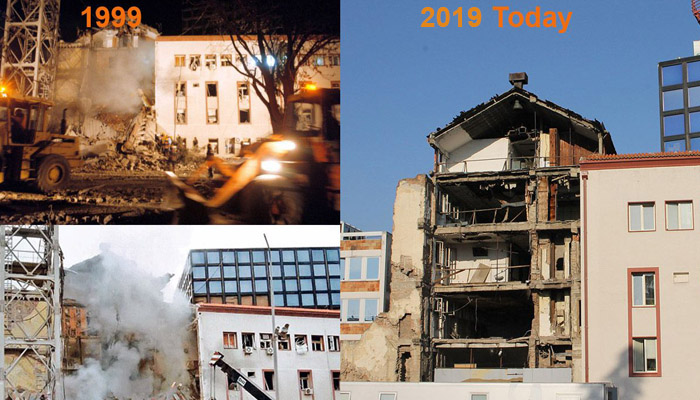 A few days later, on May the 7th, NATO missiles hammered into the Chinese embassy building. On that occasion three Chinese journalists were killed and the son of the ambassador. This tragedy was completely unexpected and official Beijing protested. NATO apologized with the statement that old map f Belgrade was to blame and that the embassy was not the target. 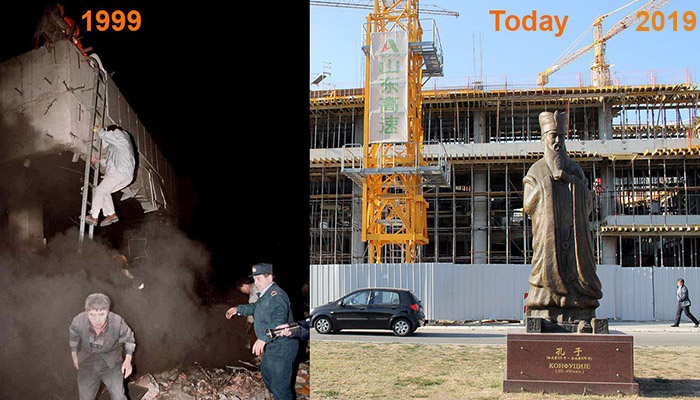 As NATO bombing continued, in the night between 19. and 20. of May neurology department of Clinical center of Serbia, ”dr Dragiša Mišović” on Dedinje, was shelled. At the moment of the attack four babies were being born. Two expectant mothers were injured and the babies were evacuated to the other hospitals.

No matter what the reasons and the excuses for the bombings of FR Yugoslavia were, shelling of the civilian targets everyone in the country felt as an absurd. The feeling of helplessness to fight back the biggest military force didn’t last long.

”Crazy Serbs” was the epithet that was given to us throughout history, and I must admit, we have justified it. In all that hopelessness, while booms and missiles whizzed over our heads, famous Serbian defiance (inat) awoke. Yes, ”inat” is a word that cannot be adequately translated into another language but it means doing something and persisting in it, despite the fact that what you are doing is pointless and contrary to common sense and with the purpose of gaining a satisfaction that is not reasonable for anyone else. 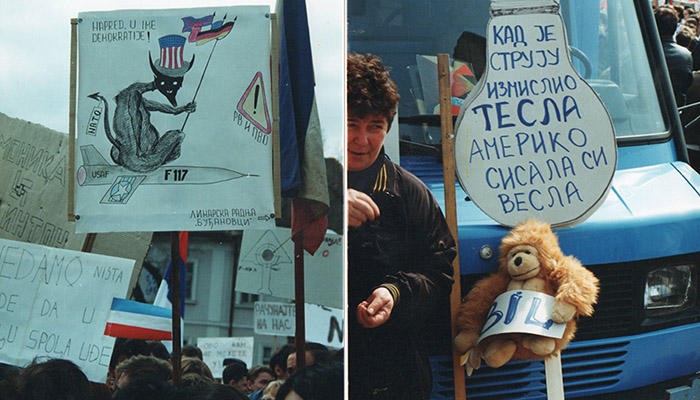 That very word, that feeling, made thousands of people put on themselves printed target signs and every night stand on Belgrade bridges as a human shield. 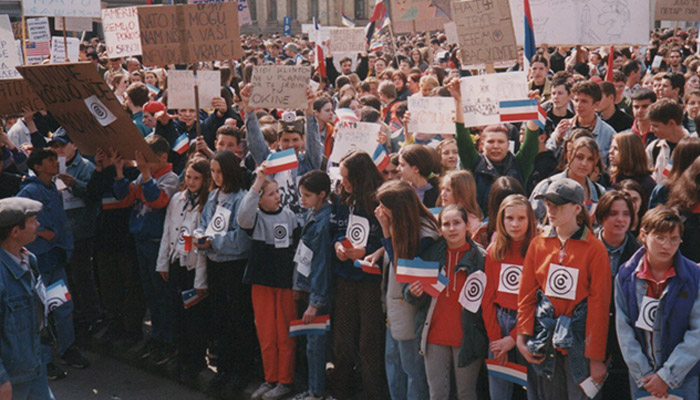 Instead of going to shelters ”Crazy Serbs” were ready to die, because if NATO was to destroy our bridges, then they’d better destroy us all. What is life if you don’t have a bridge to connect you to your friend on the other side.

”Crazy Serbs” persisted, day and night. We danced on the bridges, laughed and told jokes, not caring about a read button that someone could push and pour bombs on that very bridge that we were on.

”Crazy Serbs” endured and protected their bridges with their bodies.

You can conquer us, but you can’t defeat us.

We will never forget NATO bombing

Two decades have passed, the scars are here to stay. Movies were made about the NATO bombing, stories were told over and over again, monuments were built for the victims and life has slowly returned to normal. We had to fight everyday problems.

Still, whenever I pass by any of the bombed buildings, I remember, and I will never forget NATO bombing of Serbia. Not me, nor any of us ”Crazy Serbs”. In spite all this, we don’t hate anybody. On contrary, we only look for, and see, just the best in every person. After all, it is people that matter. Wounds leave scars that, fortunately, heal.

Find out what was it like to be under NATO bombs for 78 days. Visit bombed locations in private tour Traces of NATO bombing of Belgrade. Be a ”Crazy Serb” for a day. 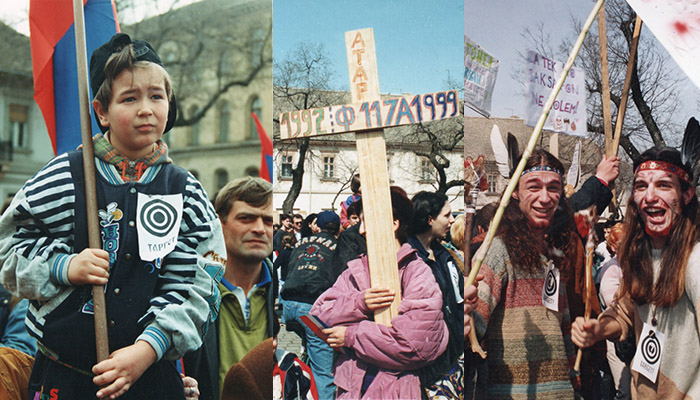 Special thanks to the Sombor newspapers on permitted photos.